Kateryna Lagno wins the 2022 Astana Women’s Grand Prix with 8/11.
Aleksandra Goryachkina comes in second, while Zhu Jiner and Dinara Wagner achieve IM norms.
After a long and tense final round, Kateryna Lagno, playing under the FIDE flag, emerged as the winner of the Astana leg of the 2022-2023 Women’s Grand Prix.
Kateryna Lagno was undefeated and scored 8/11.  She was a full point ahead of pre-event favourite Aleksandra Goryachkina, who could only achieve a draw in the final round against Vaishali Rameshbabu and finished with 7½ points. Zhu Jiner, representing China, came in third with 6½ points.
Kateryna Lagno takes home the €15,000 first prize in addition to 160 WGP points. The next WGP tournament will be held in Munich, Germany, from February 1-14, 2023.
FIDE President Arkady Dvorkovich was the guest of honour at the final round of the Women’s Grand Prix, which started this afternoon in Astana’s International Business Hub. After congratulating the organizers, arbiters and media team, he approached the board on which Alexandra Kosteniuk and Kateryna Lagno were already seated and made the ceremonial first move.
We have some interesting games by Kateryna Lagno from the event with commentary by Chessbase.com. 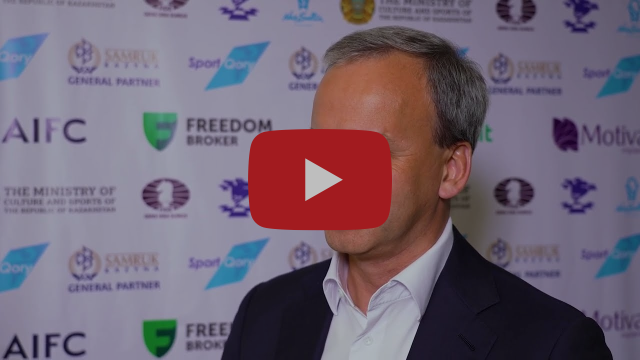