Who will be the 2021 Kenya National Chess Champion? – Big Ben Theory

by Mehul Gohil (aka Gorilla) – reigning Kenya National Chess Champion.
Let me get the CLEAR FAVOURITE out of the way so that I can get to talking about the gazellish things:
BEN MAGANA IS THE CLEAR FAVOURITE TO DRIVE OFF WITH THE CAR COME DECEMBER 30TH 2021.
In the last edition, the winner of the Demio was on a hot streak, having bagged the Mombasa Open and Bungoma Open titles, to say nothing of the boot camp AAG training in Casablanca. He was unstoppable.
The only player in 2021 who has a similar hot streak going into Christmas is Ben Magana. He convincingly won the Nakuru Open, and then produced one of the best international performances for Kenya by crashing the podium at the World Amateur Championships with a plus 2200 TPR. There is no other Kenyan player making moves on his level in 2021. This dude is the CLEAR FAVOURITE to drive off with the car.
It would make no sense if arguably the greatest Kenyan player of all time until now failed to bag the biggest local prize.
In the ladies section, it is very difficult to predict who will win. I could say WCM Joyce Nyaruai, but we have the likes of new superstar Glenda ‘National Anthem’ Madelta, we have the mercurial and unpredictable reigning champ WFM Lucy Wanjiru, we have Sasha Mongeli who played with the big boys in Greece and produced a very respectable result. Then you have the young Turks like the 12-year-old prodigy Elizabeth Cassidy, and Naiya Gosrani et al.
I am simply not calling any clear favourite for the ladies section. It will be ballistic, is all I can say.
Ben Nguku (alongside Joseph Methu, the strongest lion never to win a national championship…completely baffling) and Gtihinji Hinga.
Ben Nguku scooped the Muranga Open; Githinji triumphed at the Nairobi OTB Open. It really helps subconsciously to win a whole tournament. Githinji has also won back to back Galleria Blitz affairs. Whilst blitz is no appropriate measure for classical chess prowess, winning two events in a row again adds to positive psychology in the run up to the big event.
Of course, neither of them have done a Ben Magana, but these two after him are the next two favourites to drive off with the car.
Gorilla and Methu have been the two underperforming lions of 2021. Surprisingly neither of them have bagged any sort of silverware this year. Gorilla in addition, has the burden of carrying the defending champ (or is it deafening champ?) load, which is always a liability. Methu and Gorilla are still exhibiting post-Covid curfew blues. They have serious psychological and chess moves repairs to do. Will they complete these repairs by Dec 26? That remains to be seen. But if they do, then even Magana will have to start worrying…
The above five I have mentioned (Magana, Githinji, Nguku, Methu, Gorilla) have a 90% chance of clinching the overall title and exiting the venue with a vroooom vroooooom….
A major factor working in their favour is that the national championship is 9 ROUNDS LONG. That is a MARATHON. MARATHONS FAVOUR THE DINOSAURS. The young Turks and others have yet to learn the important aspect of STAMINA. With 9 rds, these five dinosaurs can stomach a loss and a draw and still triumph on Dec 30.
But that said, there is still that 10% chance that belongs to:
We have a bunch of dangerous guys who can totally sabotage the vroooom vroooom dreams of the five favourites with 90% chance above.
There is a reason the average Elo ratings of the top 10 Kenyans has dropped consistently in 2021 (leading Kenya to post its worst international ranking ever at No. 124). It is not really because the top 10 have per se become weaker as players. Or because the top 10 have faltered so badly internationally. IT IS BECAUSE FOR THE FIRST TIME SINCE THE 1990s THE GAZELLE BASE HAS SHOWN A MASSIVE INCREASE IN STRENGTH LEVELS.
Yes, the top 10 Kenyans Elo average has dropped because THE GAZELLES HAVE POACHED THOSE ELOS FROM THEM. The way Magana, Gorilla, Ateka, Negz, Nguku, Omolo and Co wiped out the Andolo generation dinosaurs in the first decade of the 21st century, I now see clear signs of my generation of dinosaurs getting wiped out in the next 5 – 10 years.
Team Wanjala can be proud of having gotten this gazelle uprising done.
We have the likes of the KCB (Kentucky Chicken and Burgers) crew made up of Tricky Ricky, Jackal, and the young Turk Njoroge. We have the new wave players led by Likoko, Chege Kairu, Jay Naker and Robert ‘Fischer’ McLigeyo. All these are dangerous players and can and WILL suicide bomb the favourites.
Then alongside them, we have a scattering of various upcoming players. The fact is, THE GAZELLE STANDARDS HAVE GONE UP. THERE ARE NO MORE EASY GAMES FOR ANY LION ANYMORE. Even a Round 1 victory is no longer a guarantee. A lion has to sweat to win. Stamina will play a BIG ROLE.
I am expecting the 2021 National Championships to go down as the toughest local (Kenyans only) Swiss event in history. It will be bloody.
And that is my objective fart preview analysis of the forthcoming 2021 National Championships.
I hope, like last year, Chess Kenya put in place a kick ass squad of incorruptible arbiters. Especially good was cordoning off the top boards from the ‘spectators’. I hope the same standards prevail and the 2021 national championships remain a clean affair where the best player indeed does drive off with the car. 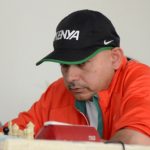 Alireza Firouzja was banned for cheating on Chess.com #TweetOftheDay

Alireza Firouzja was banned for cheating on Chess.com #TweetOftheDay